What It Really Feels Like To Jump From a Plane

Here’s the straight dope: Jumping out of an airplane feels really, really, really good. That’s why jumping off a plane ranks number-one on the world’s buckets lists, dear reader, and why hundreds of thousands of adventurers just like you take to the skies every year! There’s a trick, though: Jumping out of an airplane is pretty darned hard to wrap your head around, especially when most of your experience in an airplane — just like everyone’s, mostly — involves sitting in the bubble of a commercial airliner. How can we help you imagine what it’ll feel like to jump out of an airplane when that’s your only basis of comparison? Well: we’re going to try.

It goes without saying that the only way to really know what it’s like to jump off a plane is to actually make that skydive happen — but here’s the information you’re missing, so you can get past that pesky fear and give it a shot. 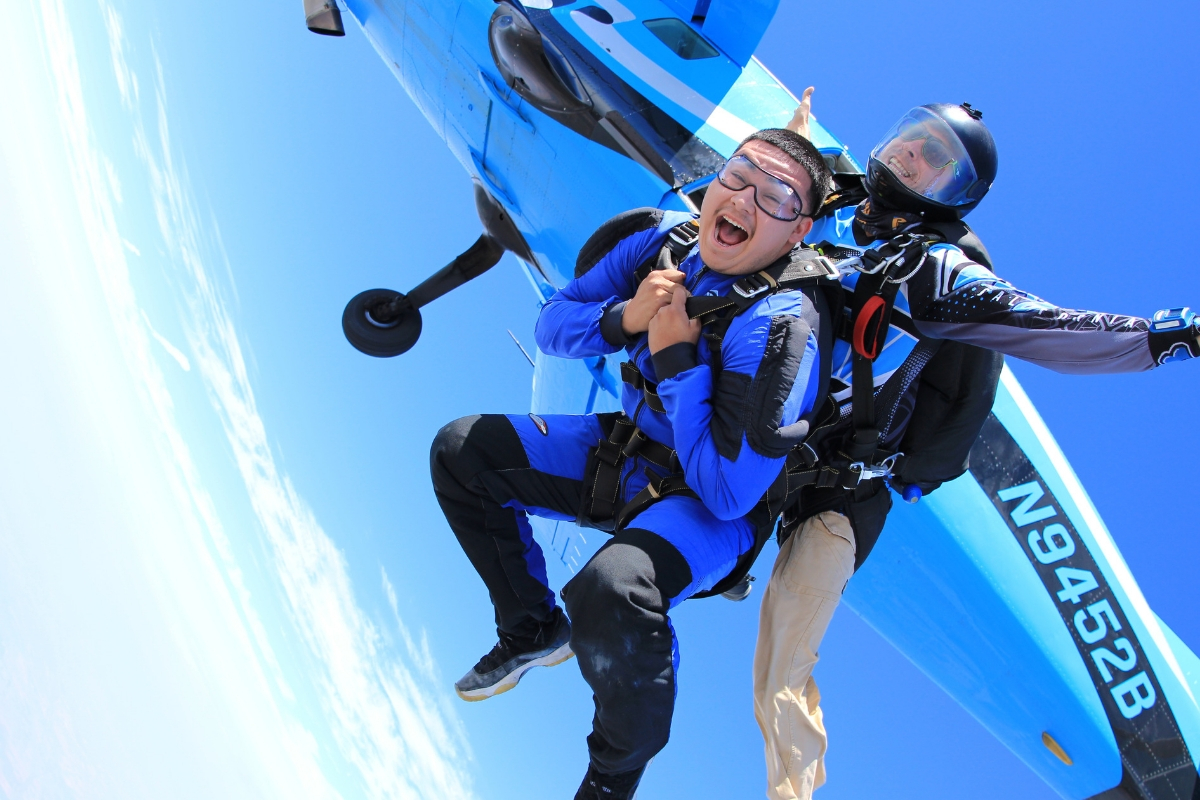 1. The view from the plane before your skydive is magic

For real, yo. Do you think that skydiving is going to feel like falling? Surprise! There’s no sense of “falling” at all. That’s the magic of the skydiving view.

In a very real way, visual depth creates the sensation of falling. Since you won’t experience visual depth until the very end of the skydive — and the air supports you right away (more on that later) — the feeling of falling never actually happens. Instead, from the door of the aircraft, the world looks as flat as a map. Without depth, your brain can’t get acrophobic. Cool, huh?

2. That feeling when the door opens is not like the movies

Can you remember the last time you rode a roller coaster? Specifically, do you remember the feeling you got when you rattled your way up to the top of the first big hill? When you felt the first car go over the top, didn’t your stomach make a ticklesome little jump because you knew that big, weightless drop was just about to grab you?

That ticklesome little moment of anticipation definitely happens on a skydive. Anticipation is the best part, in our humble opinions! However, after the door opens and you jump out, you’ll feel the incredible sensation of being supported by the air beneath you and a sense of stability that will surely surprise you. There’s a cushion of air waiting for you out there that makes sure you don’t spend your skydive kicking around in nothingness, trying in vain to find a way to right yourself, as helpless as you are in a roller coaster. It’ll empower you. And thrill you. And feel comfortable, even.

3. The feeling of jumping out of an airplane is the most euphoric experience you may ever have!

Within a few moments of leaning on that cushion of air, you’ll hit terminal velocity. That means that the resistance from those air molecules will top out your downward speed at about 120mph.

Even with that fact said, you aren’t going to feel like you would if you were jamming along at 120 miles per hour on the freeway. Without a bunch of reference points around you, your brain isn’t able to calculate the actual speed at which you’re moving. (Fun fact: The only way you’ll notice your true velocity is if you happen to get lucky and pass a cloud. If you do, you’ll certainly have an idea how fast you’re going. WHEE!)

So: What does it really feel like to jump from a plane? The best way to describe it is by using a word that comes up in every other sentence when you’re on our beautiful dropzone: Awesome! What can we say? You’ll just have to book your Northern California tandem skydive today and try it for yourself.

Related Episode: 5 Things You Won’t Expect About Your Skydive

The Joys of Skydiving

1 week ago by Skydive California

Can You Be Too Old To Skydive?

2 weeks ago by Skydive California

How to Cross Skydiving Off Of Your Bucket List

How High Are Skydiving Jumps?

4 months ago by Skydive California

Any cookies that may not be particularly necessary for the website to function and is used specifically to collect user personal data via analytics, ads, other embedded contents are termed as non-necessary cookies. It is mandatory to procure user consent prior to running these cookies on your website.

Undefined cookies are those that are being analyzed and have not been classified into a category as yet.

Analytical cookies are used to understand how visitors interact with the website. These cookies help provide information on metrics the number of visitors, bounce rate, traffic source, etc.

Performance cookies are used to understand and analyze the key performance indexes of the website which helps in delivering a better user experience for the visitors.

Advertisement cookies are used to provide visitors with relevant ads and marketing campaigns. These cookies track visitors across websites and collect information to provide customized ads.