Tom Grayson receives accolades from his students as well as other professional skydivers. He’s got an award-winning personality and an ability to establish rapport with students that is hands-down some of the best in the industry. Truly, every dropzone could use a skydiver like Tom on their team. Let’s take a second to get to know a little bit about him!

Tom Grayson is a native to the Northern California area. He grew up in Vacaville and counts himself lucky because he was able to experience an extremely diverse spectrum of people, ideology, cultures and lifestyles from the San Francisco Bay Area to Lake Tahoe. As far as skydiving goes, Tom made his first tandem skydive in 2001 and another in 2003. But the skydiving bug didn’t really bite him until after his third tandem in 2006. He says “As a tandem instructor/videographer we hear first-time tandem students say that they’re going to learn to skydive all the time. I said it as soon as my feet touched the ground after jump number 3 and got the reaction of “yeah, we hear that all the time.” I proved them wrong when I got back to the office and handed over my credit card and said I would be back next weekend. 12 years later, I still feel that excitement to go skydiving.”

Tom received his tandem rating in 2011 when he had about 1500 jumps to his name. Up until that point, he had been flying wingsuits and doing video for tandems. He credits the dropzone manager where he was working at the time for getting him to pursue his tandem rating. Tom recognizes the heft of receiving a tandem rating. “[With a tandem rating] someone else’s’ safety and life was in my hands. That was a responsibility that I took very seriously, and it changed my direction in the sport, and in life.”

It was only a matter of time before he would find his home at Skydive California.The skydiving community is a relatively small one and each dropzone has a unique personality. After feeling that the vibe and management at his old dropzone began to go in a direction that made him no longer enjoy going to work and making students smile, Tom took a bit of a break and went to do some winter work in Hawaii. When he returned, he knew it was time to move on. He made his way to Skydive California when a couple of jumpers who knew him gave his name to drop zone owner Aaron Oerhle-Steele as someone they thought would fit in the family. Tom says “Skydive California brought every bit of the family vibe and joy back to skydiving for me. It has truly become a home in every sense of the word. I have the utmost respect and trust in every member of the staff and the fun jumpers.” 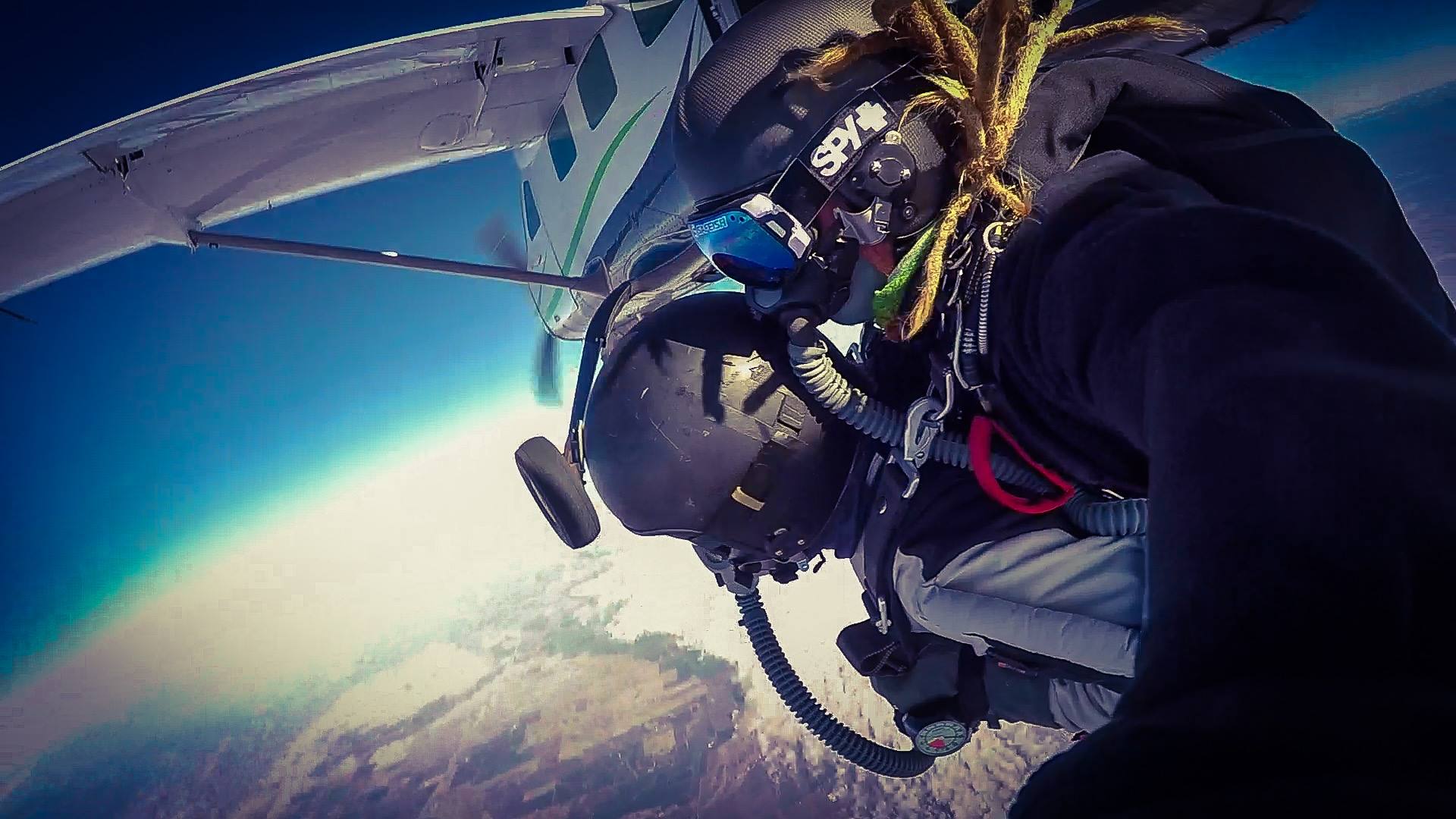 If you are wondering what enables Tom to build the rapport with students that he is so widely known for and how he is able to connect with students in such a way. He says it is:

“Plain and simple: I’m thankful for what I get to do in life. I wouldn’t be able to do what I do if it weren’t for the people that have helped me out to get where I am. That includes every student I’ve been lucky enough to jump and share our sport with. It is an opportunity that not many people get to experience in life. I want people to leave with a positive view of our community and the feeling that they are welcome to join us with or without a tandem instructor attached to them.”

His advice for other instructors to connect in a meaningful way with their students is to remember:

“It is not your skydive. That skydive belongs to the student. As a TI, you are there to keep them safe and to make them feel calm in a situation that is mind-blowingly beyond their comfort zone. It may be the only skydive they ever do. Despite the day you may be having, don’t bring negativity to their experience. Someday, that person may have thousands of skydives and will be sitting around a campfire talking about their first jump. Be “That Guy” not “That Guy”, if you know what I mean.”

What really sets Tom apart can be seen in his response to the question “What was your most memorable skydive?”

“That is a really tough one to answer. I can’t even begin to explain how much skydiving has given to me. Being able to take someone who has no use of their arms and legs due to ALS and seeing pure bliss in their face after landing; being told by your student under canopy that they have cancer and only a few months to live, or screaming it out with them because they beat it; watching the sunrise behind Honolulu from 13,000 feet; looking into Oregon from 24,0000; being on ash dives for your best friend that have passed or for your best friend’s mother. I can’t pick one most memorable jump because I’ve been given so many unbelievable memories.” 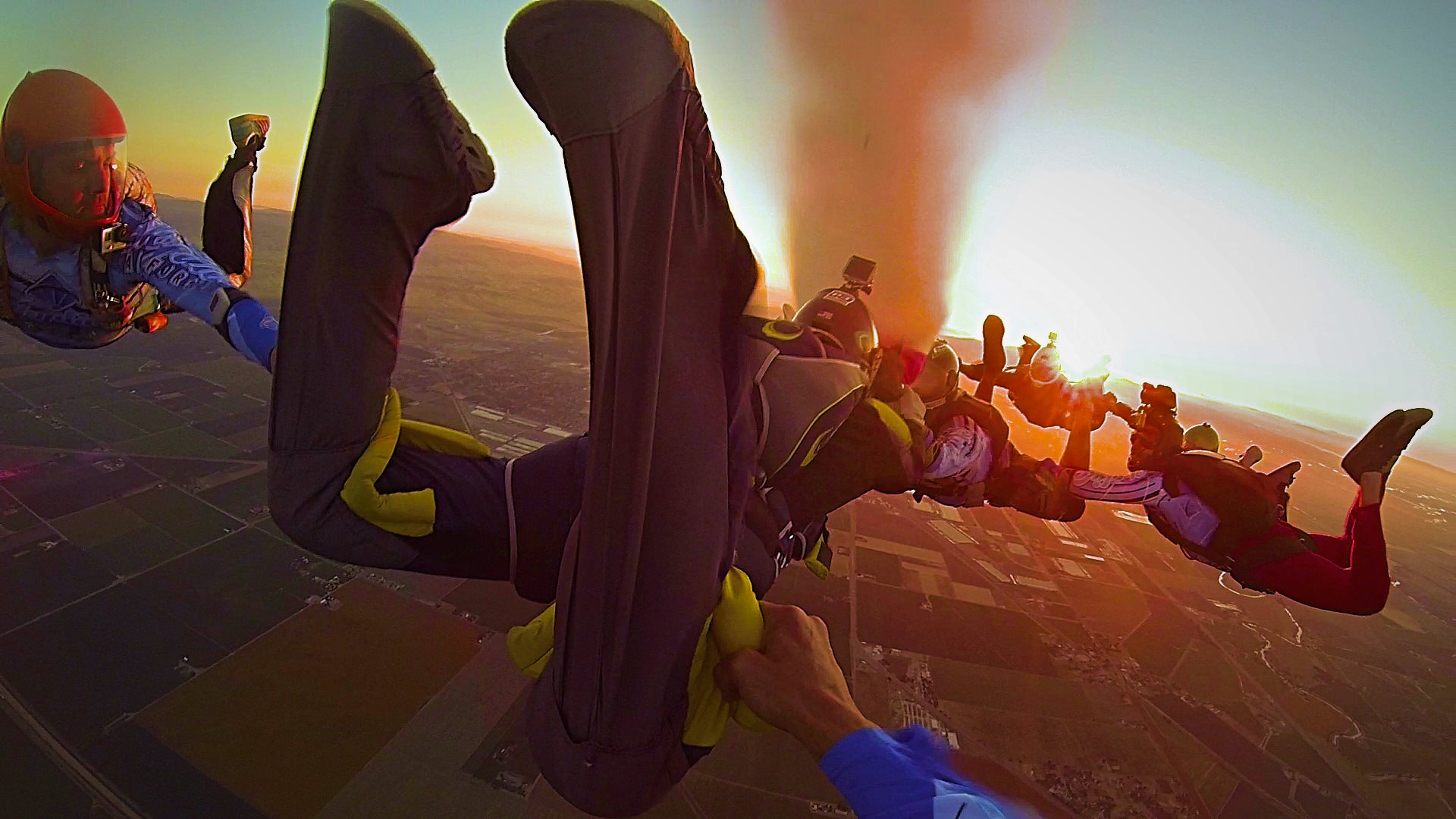 And for the most memorable student? Tom says:

“After answering the last question you can see that I’ve had some very memorable students over the years. But there is one smile that will always stand out in my mind. It was Chelsea. August of  2016 at Skydive California. Chelsea was the first person I’ve jumped with that wasn’t able to see the beauty outside the door. We tell people not to close your eyes because you’ll miss it. I had the honor of doing my best to verbally paint a picture for someone who was blind. As we sat by the door, I took her hand and reached out to put her hand in the wind. Her face lit the plane up. You can’t imagine a bigger smile than what she had squatted down in the door for exit. As instructors, we can look at your face in freefall and check that smile. Under canopy,  we talked through every turn and spin and I did my best to describe the 100 mile view. Chelsea was a very small lady so it was safe and easy to give her a soft standup landing. After I unhooked her, she turned around and I got the full effect of our bliss on her face. One of my favorite photos ever is of our canopy still kiting up behind us and her memorable smile.”

Tom Grayson is a tandem instructor who stands apart. Take a trip to Skydive California to say hello and even make a skydive with him!